When Renew Newcastle was established 10 years ago, the giant steel-producing city an hour north of Sydney had long suffered a slow decline. The city’s lifeblood had been pumped by ‘The Big Australian’ BHP’s blast iron furnaces since 1915. They had closed in 1999, and the region found itself with a 12 per cent unemployment rate and a CBD which at best was haemorrhaging retail tenancies and at worst had zones people were afraid to enter.

Marcus Westbury is an author, festival director and broadcaster, and a Novocastrian by birth. He and other colleagues created a not-for-profit plan that would attempt to free commercial properties from the legal and financial burdens of lease agreements which could potentially damage property values due to their low rental value.

“By putting in place a structure that brokered access to these spaces cheaply, Renew Newcastle was able to bring nearly 40 new creative projects and enterprises - both temporary and ongoing - back to the city in the first 12 months.

“Within the first year, the initial area of the city targeted by Renew Newcastle - the Hunter Street mall - was transformed from an empty area in the city to a busy centre of creativity and activity. By the end of that first year, many new commercial tenants were opening, and activity and interest was returning to the mall at a level not seen in decades.”

THE FOUNDER IN BALLARAT

Ballarat’s Tara Poole used the template of the Newcastle program as the basis for her own work in creating a similar trial for Ballarat, which will run until December 2018 under the guidance of the Ballarat Arts Foundation (BAF). Empty spaces: Tara Poole walked the streets of Ballarat noting the existence of buildings that were for lease or sale, or were visibly derelict.

She says she began her work out of curiosity.

“Over the space of the last three years of working out of the heart of Ballarat, I could see that the profile of the city was changing,” said Ms Poole.

“It is fair to say that I noted the many empty shopfronts, as well as being conscious of the empty State Government buildings immediately on Camp Street. I was also aware of the large amount of conversation that seemed to swirl around the prevalence of empty spaces, and the desire people had to see something being done, but nothing appeared to be happening.”

Ms Poole, who has a Bachelor of Economics majoring in Business Law, then undertook research on Ballarat’s future growth and conducted a statistically sound survey to gain insight into the perceptions of local residents about the issues affecting their thoughts on the city’s CBD, including safety, transport and parking; the appearance of the city and the mall; and the future economic sustainability of the city.

She says in conversations with Charles Kennedy, senior executive with real estate agents Colliers International, the idea of exploring the feasibility of refocussing some of the direction of the CBD’s future was discussed.

“He advised me on the changing nature of the centre of the city: specifically about the impact of big developments on the outskirts meaning retailers are pulled to the circle surrounding the city. This leaves a vacuum in certain parts of the city centre and that means change of use, which is all part of the evolution.”

Tara Poole is adamant the program is not about casting the city in a negative light, but rather accepting that retailing has changed irrevocably and so the life of the CBD must also evolve to rejuvenate itself.

She has made a map (which Poole stresses has been compiled recently through manual processes, documenting the commercial locations that carry either a ‘for lease’ sign, a ‘for sale’ sign or are visibly derelict or uninhabited) which charts the empty buildings in the block bounded roughly by Mair and Dana streets to the north and south, and Dawson and Humffray streets to the east and west.

One of those buildings for lease is owned by Mark and Carolyn Guirguis. The former surgery is on the corner of Sturt and Errard Street North is now vacant, and while Carolyn Guirguis says the premise is seeking a commercial tenant, she was excited to be part of the Ballarat Evolve program in the interim. “I am really keen to be involved,” says Ms Guirguis.

“Tara actually contacted Mark and I only a couple of weeks ago. We're supporters of BAF and she was interested in picking our brains about the whole concept  she was looking at bringing to Ballarat.

“I said, 'We've got a building that's currently vacant and we would love to be a part of it.' I think it's a very tried and tested model. I think the cities that have gone before us have made all of their information freely available.

“It's going to be administered by BAF, who I've got a huge amount of faith in. They've been around for 20-plus years administering grants to artists. So it's almost a bit of a natural progression for them to move into property space.There are so many positives with it, I'm struggling to find a negative so far.”

Ms Guirguis says it’s interesting that Poole has chosen the name Ballarat Evolve rather than ‘renew’ or something similar.

“I think it’s a really positive way forward. It's not going to solve all of the problems everywhere but I think that it comes with so many positives and it’s done on many different networks and on many different levels. I think it brings a whole lot of positivity with it.

The two things an artist needs, more than anything, are time and space says Ballarat’s Kim Anderson. 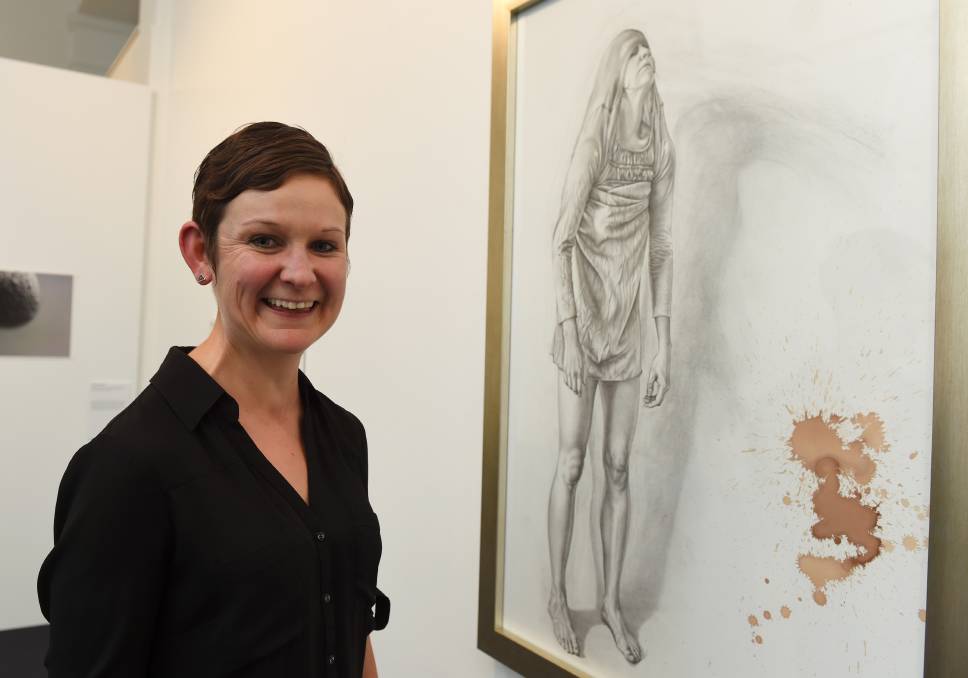 Anderson will be the inaugural Ballarat Evolve artist working at the Sturt Street premises provided through the Guirguises and the Ballarat Art Foundation.

The award-winning practitioner works mostly in drawing, and while her works are large now, she’d like them to be larger.

The limitations of working in a spare room in her house mean she can’t do that at present.

“I’d like to get bigger, but I am limited by the space I work in,” says Anderson, who is currently undertaking a residency at The Art Vault in Mildura.

“The space that you have tends to dictate the kind of work that you make, and I would really like to make that bigger work as I have a solo show coming up for BOAA (Biennale of Australian Art). This will be the perfect opportunity to do that; I wasn’t really sure how to do it otherwise.”

Anderson says it’s important to remember that creating art is work, and having a workplace to go to is an important discipline for an artist.

“You can get distracted working at home, with piles of laundry to do and so on. It’s really important to have a space to work in.

“There were so many empty spaces about the CBD. In the past people weren’t really open to artists moving into spaces. In this case, Tara is the right person to lead us.”

BAF chair Paula Nicholson agrees with Carolyn Guirguis that focusing on property is right for the foundation.

“Our grants assessment team is hugely experienced, so this extension is a natural one for the Foundation. We are fortunate being able to rely upon the experiences of the application of the Renew program in other cities.

“We are really interested to hear from creative groups or individuals who may wish to put themselves forward for consideration to take part in the trial,” said Paula. “We are primarily seeking artists and creative who are looking to operate ongoing activities in empty retail spaces – this means that the spaces are occupied and utilised, and full of life.

“Equally we are also seeking interested landlords and representative agents to put forward those spaces they are struggling to rent, and who want to make the most of the opportunity to show their locations off in the best possible light.”