For newly widowed mother of two, Lana Cormie, there is one mantra that is guiding her in her grief; she needs to stay strong for her children.  Aged just one and three, Lana now faces the daunting task of raising a family alone.

It’s been just over three weeks since her husband along with another man, Jack Brownlee was tragically killed in a devastating trench collapse in Ballarat’s western suburbs, and the city is still reeling.

Aged just 21 and 34, Jack and Charlie had on that Wednesday morning returned to the Winterfield site where they had been working before disaster struck at about 11am.

While the specifics of the incident are still to be uncovered, the deaths of these two young trench diggers has united two families in the pursuit of ensuring nobody again fails to come home from work.

Originally from Queensland, Charlie Howkins was a true all-rounder.  A builder and a stockman who could turn his hand to just about any practical task, he met his future wife while working on a cattle station.

The couple made the decision to head down south to Victoria to start a family, where Lana had originally hailed from.

“The kids were a massive part of Charlie’s life, he adored them and he was very involved,” Lana said of Charlie. A father lost: Charlie Howkins' brother Reg and wife Lana Cormie with a family photo. Charlie was one of two workers killed when a trench collapsed on a construction site just outside of Delacombe on March 21. Picture: Luka Kauzlaric

“He was a very reserved man, a very gentle soul...but as we found through this he obviously touched a lot of people's lives.”

For the past four years he had made a living in earth moving.  While certainly not a passion, the work provided steady income for his young family.

When the unthinkable occurred on that Wednesday morning, Charlie was killed instantly.  In a trench more than three metres deep, the experienced worker was buried by tonnes of loose earth.

READ MORE:  WorkSafe to investigate how and why trench collapse happened 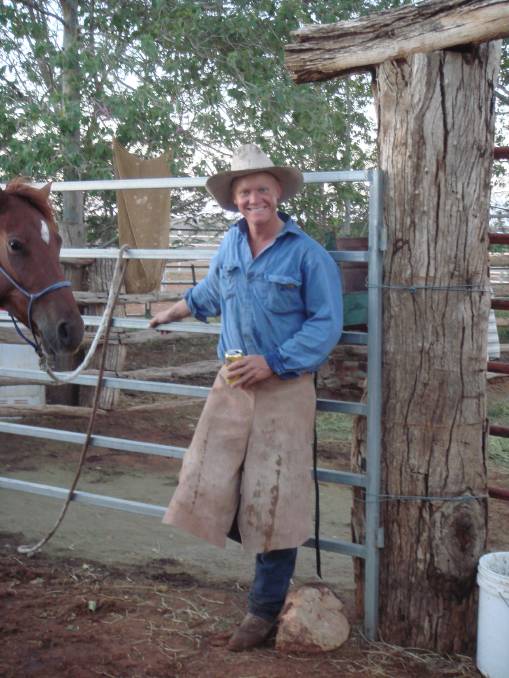 Man of many talents: Charlie Howkins grew up in Queensland and worked as a builder and stockman before moving to Victoria, where he took up work as a trench digger.

“He took the job even though the pay wasn't great because it was regular, and it was what we felt our family needed at the time with very young children,” Lana said of her husband’s work.

“If I thought he was in any danger I would have gone back to work full time and he could have stayed at home with the kids.

“But that’s the thing, these people are just workers, they get told what to do.”

For Janine Brownlee, the mother of 21-year-old-Jack, March 21 had already got off to a bad start.

In hospital battling severe migraines, it would be some hours after the trench just off the Glenelg Highway caved in before she would even be informed of the incident.

The call came through from a family friend to husband and father Dave, delivering the harrowing news it was Jack who was among those trapped in the hole.

By the time the young man was finally removed from the trench and packed into a helicopter en route to the Royal Melbourne Hospital, Janine, Dave and Jack’s brother Mitchell were battling heavy traffic to get to their boy in Parkville.

“We were in peak hour traffic getting updated and they were telling us he was in surgery and they didn't know if he was going to survive,” Janine said of the drive.  “That's gut wrenching as a family.”

By the time the family arrived in Melbourne Jack was being described by doctors as “the sickest boy in Victoria”.  Many of the young man’s organs were failing and doctors had pumped more than 60 litres of blood through his body in an attempt to keep him alive.

By 4am on Friday Jack was preparing to undergo his fourth surgery and medical staff were telling the Brownlee’s to brace for the worst.

“They said call family in because if he stops on this one, they can’t keep working on him,” Dave said of Jack’s final hours.

“When we were getting updates we’d have a social worker or a nurse come out...but when six people came out I knew then, you could just see in their eyes that there was no good news.”

By midday the big, brown eyed boy they described as “the life of the party” had become the second victim of an incident which should never have occurred.

Jack Brownlee had been working as a trench digger for about eight weeks when tragedy struck.

By the time Jack was pronounced dead, the pair had become the sixth and seventh workplace fatalities this year in Victoria alone.  As of April 13, that figure had risen again to nine.

Those deaths come after 27 Victorian workers failed to make it home in 2017, 20 of whom were operating in regional or rural parts of the state.

A Worksafe investigation has been launched in the wake of the tragedy, which both families hope will drill down to the precise cause of the two fatalities.

Police have also begun interviewing the families as well as others with intimate knowledge of what went so horribly wrong on that warm March morning.

These investigations are likely to take months before they reach any firm conclusions, further harrowing the wait for two families already dealing with the immense suffering of untimely death.

While rumours of the cause of the collapse continue to swirl around the city, what is clear to all affected is that two young men died in a disaster which could have been prevented.

“Charlie was a very responsible person,” Lana said.  “He never would have put himself or his colleagues in a situation where he didn't think they were safe, but clearly the systems weren't in place.

“No one should go to work and not come home and something needs to be done in this workplace, in this industry and in this country so that we look after our men and women on the ground.”

For Dave, the catastrophe represents a cruel reminder of his own brush with fate more than a decade ago when he was one of 27 miners trapped underground at the Ballarat Goldfields mine. In the coming weeks he will attempt to return to the workforce, but he remains uncertain of how he will feel when he finally ventures underground again.

Despite his own experience, neither he or Janine had ever considered the dangers their son may face working in construction.  If anything can be learned from their tragic loss, the family hope those dangers will never again be overlooked.

“These boys have just gone to work to do their job; these days this incident shouldn't have happened,” Janine said.